Canine Influenza Shot: Does My Dog Need It?

Wondering if your dog needs the canine influenza shot?

It protects against the latest strain of dog flu.

If your dog goes to Camp Bow Wow, we should chat about the shot.

Otherwise, it really depends on your dog’s lifestyle.

If your dog visits dog parks, groomers, doggie daycares, boarding facilities or is just a social dog, you may want to consider the shot — or simply keep your eye on the issue.

If your dog has limited exposure to other dogs and dog-oriented facilities, your furry friend may not need the shot.

First things first, what is canine influenza (aka, “dog flu”)?

Canine influenza (“dog flu”) is an upper respiratory disease caused by a virus.

It’s more severe than many upper respiratory diseases — including Bordetella — because the infection can progress into viral pneumonia.

Much like the human form of the flu, canine influenza is very contagious.

What is the canine influenza shot?

The canine influenza shot protects against that latest strain of dog flu.

The virus is constantly mutating. The latest strain of canine influenza appeared in the United States in 2015.

There was a dog flu outbreak in Chicago. Since then, the latest strain has spread to different states across the country.

Because this is a new strain of the disease, most dogs don’t have natural immunity to it.

It’s something we’re talking about in Castle Rock because some dog boarding facilities and daycares now require it.

Get your dog’s shots up-to-date!

How can my dog get dog flu?

There are a number of ways your dog can get dog flu:

As the American Veterinary Medical Association will tell you, the virus can stay alive for a while. It can live on:

When are dogs most contagious?

Here’s the tricky thing about the dog flu: The most contagious dogs are the ones that don’t have any outward symptoms yet.

Are certain dogs more vulnerable to it?

Canine influenza is more likely to be an issue for a dog that’s around other dogs.

How often is the canine influenza shot needed?

Initially, your dog receives a shot and then a second one four weeks later.

After that, one shot is needed yearly.

How long does it take before the vaccine goes into effect?

Like other vaccinations, the shot isn’t effective right away.

In this case, your dog isn’t fully protected until the week after the second shot.

How effective is the dog flu shot?

Where can I learn more? 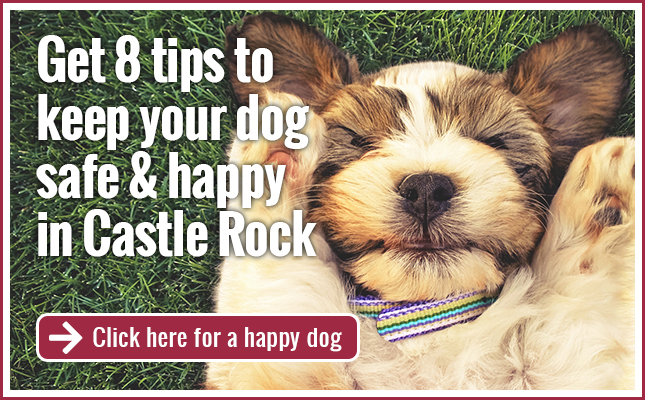 Cherished Companions Animal Clinic is a veterinary clinic in Castle Rock, Colorado. Specializing in the care of cats and dogs, our goal is to help you and your pet feel more comfortable, keeping your stress to a minimum.

This article is intended to provide general guidance on dog flu and the canine influenza shot. If you have specific questions or concerns, please contact your local veterinarian. (If you live in or around Castle Rock, we welcome your call: 303-688-3757.)

Our Castle Rock veterinary clinic is here to help you and your pets feel at ease. Here's to happy, healthy and comfortable pets!
Back to top